A true bug’s an insect

if they eat by chomp-chomp

Ants are not bugs.

While a bug’s beaky tube

by piercing the skin

Reproduced with permission of CSIRO

The Hemiptera are called ‘true’ bugs because everyone – entomologists included – tend to call all insects ‘bugs’. That is a loose term, whereas the true bugs are just those contained within the insect order Hemiptera.

This group of insects is very large, with around 75,000 species worldwide. Around 1,700 of these can be found in the British Isles. Many of them are very different from each other, but all of them have piercing mouthparts with which they can suck the juices from plants or animals – usually plants. Their mouthparts are contained in a beak (or rostrum) which is usually held underneath the body when not in use.

As plant feeders, some bugs – such as the aphids, for example – are serious agricultural pests, not just because they damage crops but because they can transmit viral diseases too. However, most bugs are not pests.

The true bugs often have long antennae divided into a small number of segments, and the front wings can be somewhat hardened. Some bugs resemble beetles, but beetles have wing covers that do not overlap, unlike the bugs.

Characteristics
The insects in this order are extremely diverse in their size, shape and colour. There are about 6000 described species in Australia, ranging in size from 1 to 110 millimetres in length. The name Hemiptera means ‘half wing’ and all hemipterans share the following features:

• 2 pairs of wings, although some species may be wingless and others have only forewings. Wings are generally membranous but in some species the forewings may be hardened at the base
• Piercing or sucking mouthparts appearing as a sharply pointed tube known as a proboscis or rostrum, which extends from the underside of the head
• Compound eyes of various forms
• Up to 3 ocelli present
• Antennae vary and may be either short, or long and conspicuous

The young of hemipterans look like small adults. Some bugs may be mistaken for beetles but can be distinguished by their mouthparts as beetles have mandibulate mouthparts while bugs have sucking/piercing mouthparts.

Feeding
Most species of Hemiptera are plant feeders, sucking sap with many causing considerable damage to crops, ornamental garden plants such as roses, shrubs and trees. Some species are bloodsuckers of mammals and birds while others are predators that feed on other invertebrates, including some pest species and are therefore beneficial to man.

What is a bug? It’s not something you come down with. (A bacterium is not a bug; a virus is certainly not a bug.) A bug is not any old thing that crawls. It’s not a tick, not a mite, not a gnat. A ladybug is not a bug. (It’s a beetle.) Certainly, a butterfly is not a bug. Bug, it turns out, is a technical term: “true bugs” are insects in the order Hemiptera.

The stinkbug is a true bug. So are the squash bug, the toad bug, the red bug, the seed bug, the box elder bug, and the assassin bug. Assassin bugs capture their insect prey with sticky front legs and stab them with their little beaks. There are ambush bugs. Ambush bugs sit like statues on flower petals, waiting, waiting … Waterbugs are true bugs. The bedbug is a bug. Ugh.

Besides being an insect with the usual six legs and three main body divisions—head, thorax, and abdomen—bugs have sucking, beak-like mouth parts and their life cycle occurs in a pattern called “incomplete metamorphosis.” They go from egg to nymph (a baby that looks like a small adult) to adult, with no larva stage.

Free As a Ladybird

Ladybird ladybird fly to your tree

The children are screaming and coming to see

They have a big jar and a challenge to get

A most lovely bug they can keep as a pet

Take to the wind and race with the bee

For you are too quick and too nimble and wild

To be trapped and contained by a curious child

Ladybird ladybird fly to your den

The children have gone and you’re safe once again

The garden is quiet just you and the gnomes

Now the children have all raced away to their homes.

Lands on my hand

And I’m in love

That though I’d so

Love her to stay

Coccinellidae is a widespread family of small beetles ranging in size from 0.8 to 18 mm. The family is commonly known as ladybugs in North America, and ladybirds in Britain and other parts of the English-speaking world.Wikipedia

Let’s go Ladybird this week with the picture prompt below

And a Monday quote:

is a splendid work of art,

the best I’ve ever seen, I’d have to say

and every slice of carrot,

you’ve set out in a most creative way.

I love the way the peas spell out my name

and I know that you’ve been working

on this masterpiece for hours,

but I’m sorry, every night I feel the same.

what you do to all this food,

what handiwork you serve me up for tea.

I may seem quite ungrateful

and perhaps a little rude,

but, they still all taste like vegetables to me!

Have you heard about this restaurant? They call it Pat’s Café,

It’s famous for its specialties like ‘Dungball of the Day’,

The punters flock from far afield to try the bolognaise,

Made from the finest cow manure and slurry mayonnaise.

They do a lovely paddock pie (the critics all agree),

And for the connoisseur there’s much to make them lick their lips,

Like cowpat flavoured fizzy-pop with battered dung and chips,

But the top dish on the menu simply has to be a scoop,

Of dung ice-cream and sprinkles with a giant squirt of poop.

Yes, Pat’s Café gets rave reviews from diners in the know,

There’s nowhere else that dung beetles with taste would rather go.

END_OF_DOCUMENT_TOKEN_TO_BE_REPLACED 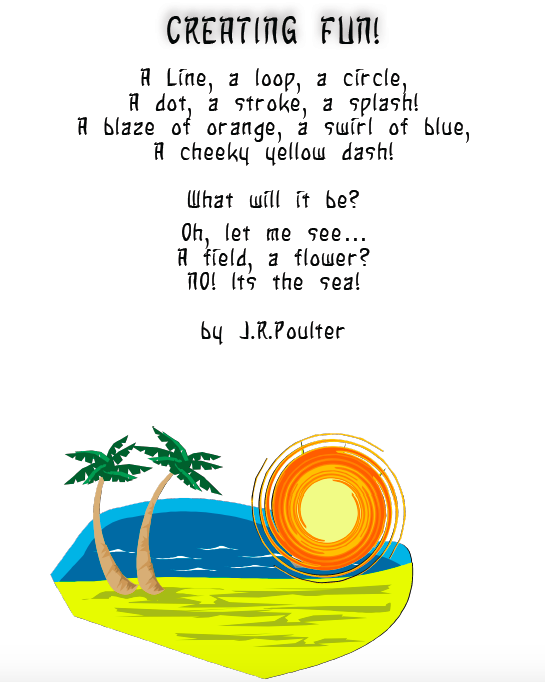 After 60 years of drawing

his nose was all but blunt

So our famous Mr Squiggle

went on a sharpener hunt

He took his rocket to the moon

with Blackboard and Miss Jane

They found a big red sharpener

and his pencils sharp again