My cat liked to climb on my bedroom chair,

Right next to my chest of drawers.

He would spring to the chest with a mighty leap

Where he landed on all fours.

There on the top, where a mirror stood,

He looked at me, as a winner would

While he smugly licked his paws.

This was a trick he’d performed before,

I’d found a shot of a lion’s head,

On a leaflet from the zoo.

I shaped it into the mirror’s frame:

One look would scare him and end his game,

I watched to see if he’d turn his head

And he’d face what was waiting there.

To see him jump promised such a treat:

The suspense would be hard to bear!

Then he turned. I could not believe my eyes:

He showed not a hint of the least surprise;

Not a bit did he seem to care.

Then as I was watching he lifted a paw

As if to greet someone he knew.

Was it his grandpa he thought that he saw?

Was he wondering just what he should do?

But stroking the lion, he shredded its face!

This meant his smug self soon appeared in its place,

As he thought: “I’m much smarter than you 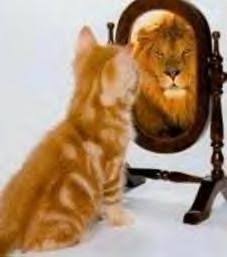