They’ve got you long necked lambkins,

Don’t you wish you could be me,

No fences bar my way!

As you can see, we have been shorn,

We feel so light and free!

When do you get clipped and snipped?

Both animals are ‘Domestic’ animals. What does this mean?

Both animals have thick fur.

Llamas are shorn for their wool, much like sheep.

Cats are carnivorous. What does this mean?

Llamas are herbivores. What does that mean?

Whilst Llamas can certainly jump lower objects, the fence in the picture is too high for them to jump.

The cat, however, has had no trouble jumping up onto the post!

Activity: Write a short skit to act out in class, with parts for the llamas and the cat.

Activity: There is another word that sounds like ‘Llama’ but has a variation to spelling and with a different meaning. What is that word and what does it mean? 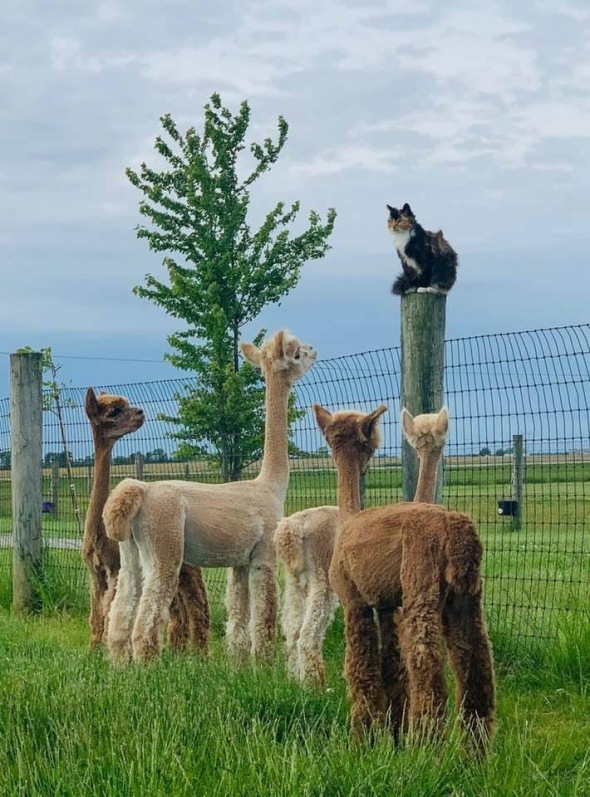 There’s the Moon,
Way up high,
Over the rooftops,
Up in the sky!
Oh, my!
Here’s the Moon
And someone’s there!
An astronaut
Shot through the air,
He dared!
Do YOU want to know
About outer-Space?
Would you like to go
To that far-away place?
Space ace!
Science will show you
Where, why, how,
Scientists will
Create the ‘wow!’
Learn now! 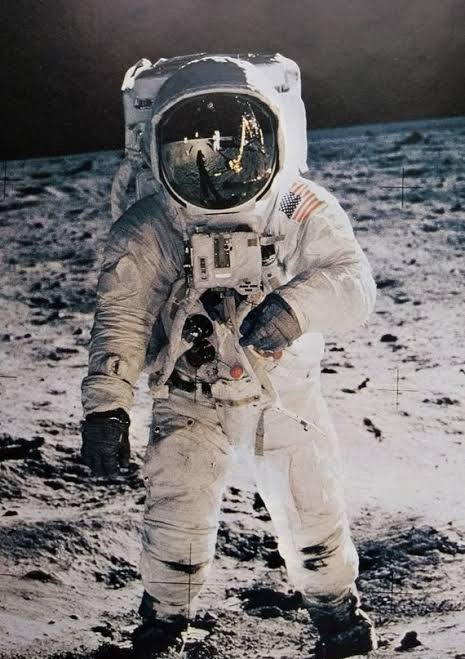 Teacher Notes & Activities
Search out the answers to a fun space quiz to test you knowledge about space travel and the daily life of an astronaut.
1. What was ‘Sputnik’?
2. What was the date of the first Moon Mission?
3. Who was the first man to walk on the moon?
4. Did the astronauts on that Moon landing leave anything behind on the moon?
5. There are photos of astronauts floating around the cabin of the spacecraft. Why do they float?
6. Find a definition for ‘zero gravity’ – then describe it in your own words.
7. What did the astronauts eat and drink whilst travelling on their journey to the Moon and back?
8. How many missions were there to the Moon?
9. Who were the astronauts on the first Moon landing mission?
10. Who was the first woman to go into outer-space?
Activity: Build a model of the solar system in class.
Activity: Find pictures that illustrate space stories, poems, fantasies –
Moon, ‘Man in the Moon’
Stars
Sun
Image from an old children’s book of rhymes –
https://images.app.goo.gl/gwHT5oTsSFtq3Dnq8
Moon poems by kids
https://nzpoetrybox.wordpress.com/tag/moon-poems/ 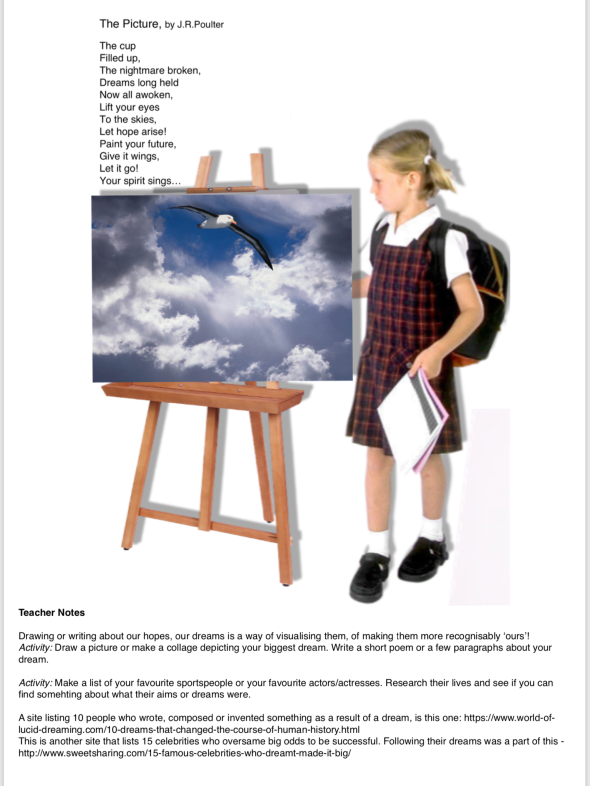 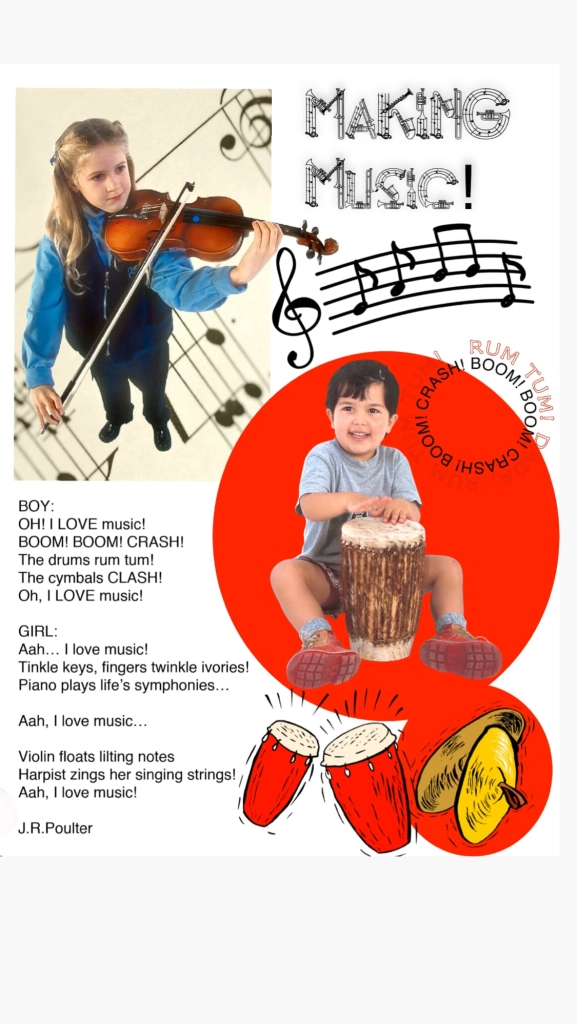 Once Upon a Time    by J.R.Poulter

Once upon a long ago

In the distant mists of time

There was a prince who had to make

A poesy all in rhyme.

He had to weave a wondrous tale

For his intended bride,

That swept the legends of the land

The myths from far and wide

Into one vast saga,

A tome to end all tomes!

He set out to collect the tales,

It took him far from home.

The prince crossed many deserts,

He climbed  too many hills,

He walked through sun and snow and sleet.

He suffered many ills!

At last, he had his great big book!

At last, he’d wed his bride!

But as he neared the castle,

He heard a mournful sigh…

What stood there was a ruin,

Of all the pomp and pageantry,

Nothing was left at all…

Amidst a drape of spider webs

Within the central court,

He found a tomb whose statuary

Had been most marvelous wrought.

There was his bride, robed as a queen,

Her king was by her side.

A scroll lay open on her lap

As turned to stone.

A crack, a scream,

He was no more.

The Tome of Tales

Lay on the floor.

The wind tore at the pages,

Tossing them far away.

All that was left, the marble tomb

And what it had to say,

“Once Upon a Time” is a narrative verse fantasy in loosely rhyming quatrains.

The story is framed around the idea of a ‘trial of love’ whereby a suitor is set a difficult task, which he has to perform in order to win the lady he loves.

Difficult to impossible tasks are seen in other fairy tales. Rumplestiltskin and Cinderella are examples.  Greek legends also contain this sort of plot device  as with the trials of Hercules and the legend of Perseus and Medusa.

Activity: Write a story or draw a wall frieze in sections  about a hero who is set an impossible task  and how he achieves it.

Discussion: It is said a challenge is good for you, it develops your thinking processes and your problem solving skills. True or false? Give reasons.

Activity: List examples of  ‘challenges’ you meet in everyday life.

Teacher Notes and Activities  by J.R.Poulter

The Seasons have been the inspiration for many poets over the years.

The earliest that I know of, is the beautiful passage of poetry  in the Book of Ecclesiastes, Chapter 3, verses 1 to 8, that begins –

“To everything there is a season,”

Activity: Find at least two other modern songs that speak about the seasons.

Activity: Find a poem  for each season that reflects the more traditional feelings associated with that season.

Activity: Write a short poem, a quatrain or a haiku, that reflects the opposite of the traditional view of each season. For example, spring might be sneezin’ season, summer might be ‘all hot’n bother,’ autumn could be a celebration of its fiery colours, winter could be all about enjoying winter sports.

“Spring Thing” talks about the end of Winter and the beginning of Spring.

How do you know this?

Activity: Find examples of the following poetic devices in the poem, “Spring Thing.”